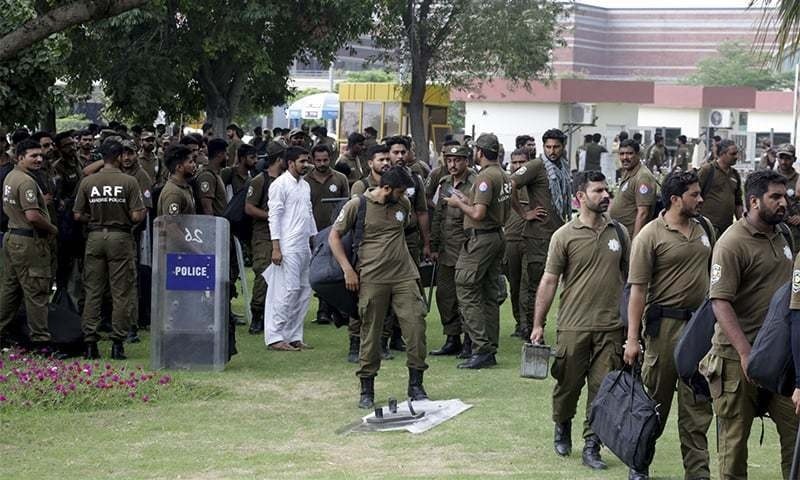 Instead of acknowledging the frontline services of police personnel in the fight against Coronavirus, the Punjab government reduced the budget of Punjab Police by Rs. 3 billion.

According to official sources, the government has allocated Rs 400 million out of the funds allocated for fuel, Rs 77 million for investigation costs, Rs 41 million for stationery, and Rs 12 crore for electricity bills And reduced the grant for providing financial assistance to the families of deceased police officers by Rs. 250 million. They said that this shocking ‘News’ has come at a time when 4 policemen in Punjab have died of Coronavirus and 650 others have been infected.

The brother of a policeman who recently died of coronavirus in Lahore said that if the purpose of the deduction was to transfer the money to the government fund for anti-corona measures, then no one deserves more funding than the police because Punjab Corona has so far received the highest number of police cases in government departments.

He said that due to public contact, doctors and paramedics as well as low-ranking policemen are at high risk of contracting the virus. He went on to say that 10 percent of the police personnel tested were suffering from corona and that the budget cuts would paralyze the police in the fight against the epidemic.

A senior official familiar with the matter told Dawn that the deduction was unfair as Punjab Police had already received Rs 180 million out of Rs 250 million in Cost of Investigation while the required amount was Rs 2.30 billion.

He lamented that with each passing year, the operational budget of Punjab Police was getting less and less which was making it difficult for the police to run their daily operations. The official said that the share of police in the total provincial budget has come down from 9% in 2011-12 to 5% in 2019-20. He said that the salary factor in this budget is increasing while the operational share is decreasing and only 15% of the budget is allocated for operations.

The official said that Rs 14 billion had been released while reducing operational expenses by Rs 3 billion. He said that out of the current Rs. 114 billion, Rs. 100 billion has been earmarked for salaries, Rs. 4.5 billion for fuel and Rs. 1 billion for electricity bills.

He further said that similarly Rs. 4 billion would be set aside to meet the basic needs of other police units including Special Branch. Includes Elite Force, Counter-Terrorism Department, Traffic, Special Protection Unit, for training.

The police official said the other money would be used for other Punjab police chiefs. He said that the worst aspect of this was that the funds allocated for the families of the officers who died during the service had also been reduced.

Continuing, he said that the salaries of Punjab Police employees (from constables to inspector general) have been frozen since 2009. As a result, officers of other departments of equal rank are receiving higher salaries than police officers.

The police officer said that in 2019, the present government had agreed to de-freeze police allowances and from 2008 fixed the daily allowance (FDA) to the value of 2013.

The official said that in August 2019, the finance department released 80 percent of the increased amount and promised to release another 20 percent in January 2020. But despite the approval of the Punjab Chief Minister, the already approved 20% FDA bureaucracy was delayed.

Complaining of discrimination in the police, he said that when the committee comprising law ministers and finance ministers discussed de-freezing police allowance in 2019, the increase in district administration officers was not considered.

Read Also: Policeman killed a Hafiz-e-Quran for refusing to do bad deeds

However, when the proposals were tabled before the Cabinet, Executive Allowance (1.5% of salary) for officers above BS-17 and PAS / PMS was included as an X-Agenda item and surprisingly. But it was also approved.

He said that this had made a big difference in their salaries as a result of which PAS / PMS officers were getting double the salary from the police officers of the same rank.

The official regretted that the Chief Minister had also approved an extension in the executive allowance of police officers. But the bureaucracy suggested setting up another committee to delay it, a discrepancy that would only discourage the police force.