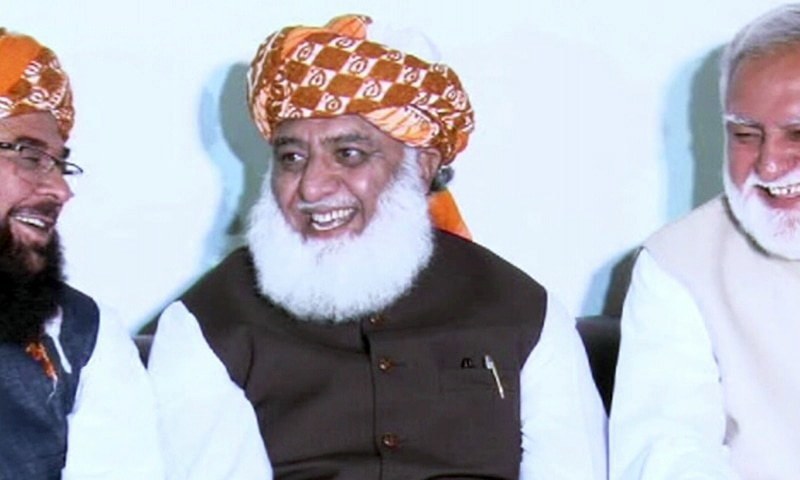 Maulana Fazlur Rehman, the head of Islamabad Jamiat Ulema-e-Islam (F), has sent a message to Prime Minister Imran Khan and the negotiating committee through Speaker Punjab Assembly Chaudhry Pervez Elahi and demanded a decision on either of the two options. In this regard, sources said that Maulana Fazlur Rehman has given a message that a new election should be announced in 3 months if the Prime Minister does not resign, the government should decide on either of these two options.

Earlier in the National Assembly session, Defense Minister Pervez Khattak had said, “Talking of democracy, the country has ravaged the country. I have seen all the spectators. Who has defeated Bhutto? Who ended Nawaz Sharif‘s government? These guys stood up and they all knocked together ‘. He said, “If you want democracy and want to run this country then come and talk if you are allowed to sit there then sit down but do not harm the country, do not destroy the country”. Pervez Khattak said, “They talk about rigging, we also talked about rigging. We went to the Election Commission, we went to court. We came to the assembly but they were not ready to listen.”

He said: “Maulana Fazlur Rehman says this jirga is for passing time, so we also pass time with you”. At a meeting of the Leaders Committee comprising opposition parties, it was decided to add further pressure on the Pakistan Tehreek-e-Insaf (PTI) government. In addition, Maulana Fazlur Rehman while speaking at Dawn News’ special program, said that if our demands are not accepted then we will take martyrdom and raise the bodies but will not go from here. The Freedom March was clear that the Jamiat Ulema-e-Islam (F) had announced in June that their party would conduct an anti-government long march in Islamabad in October.

The leader of the opposition party to hold this independence march aims to resign from the prime minister because he believes Imran Khan came to power through ‘fake elections’. The long march was announced by Maulana Fazlur Rehman on October 27 but was later postponed to October 31, and it was said that October 27 was the day against Indian occupation in occupied Kashmir around the world. Black is celebrated, so on this day, Kashmiris will be expressing solidarity. Following the announcement of this Freedom March, Prime Minister Imran Khan last week set up a seven-member talks committee headed by Defense Minister Pervez Khattak to hold talks with the JUI-F and other opposition parties.

The JUI-F chief had given permission to his party’s secretary-general, Maulana Abdul Ghafoor Haidri, after initially contacting him on the telephone for a meeting by committee member and chairman Senate Sadiq Sanjrani. However, after the Pakistan Peoples Party’s reservations on October 20, Maulana Fazlur Rehman had stopped the party’s delegation from meeting with Sadiq Sanjrani, saying that the opposition’s decision to negotiate with the government would now be taken by the Joint Chiefs of the Opposition.

In addition, on October 21, the Leadership Committee of the opposition decided that talks with the government would take place after the assurance of a peaceful march, after which the government would give the JUI-F the conditional permission to hold the ‘Freedom March’. The decision was made. The march to Islamabad led by Maulana Fazlur Rehman, the head of Jamiat Ulema-e-Islam (F), started from Karachi on March 27, reaching Lahore and then Gujar Khan from different cities of Sindh and October 31. He had entered Islamabad from Rawalpindi. However, the formal march in connection with the March of Independence began on November 1, in which, besides Maulana Fazlur Rehman, PML-N President Shahbaz Sharif, Pakistan People’s Party (PPP) Chairman Bilawal Bhutto Zardari and others. The leaders had addressed.

Addressing an anti-government march, Maulana Fazlur Rehman had given Prime Minister Imran Khan two days to resign. The JUI-F chief said that the people have the right to govern Pakistan. No institution has any right to impose on Pakistan. Addressing a rally, Shahbaz Sharif, president of the PML-N and Leader of the Opposition in the National Assembly, said, “Imran Khan’s mind is empty, there is no fear and he is running a government with magic tones, with magic tones and blows. Appointments are happening ‘. Shahbaz Sharif had said, “My danger is that the magic that they wanted to bring about change has become Pakistan’s biggest catastrophe. I have not seen Pakistan’s worst situation in 72 years.” Addressing the Independence March, Pakistan People’s Party Chairman Bilawal Bhutto Zardari said, “I want to assure Maulana Fazlur Rehman and the united opposition that we will be with us in every democratic step and we will send this puppet, the elected prime minister.” Will ‘.

In addition, while addressing a march participant yesterday, Maulana Fazlur Rehman had said that even by presenting three budgets a year, failing to achieve the revenue target could not give the government any longer respite. He also announced to replace 12 Rabi-ul-Awwal at the Freedom March in Sirat Tayyabah Conference. The backdrop of the Independence March was clear that the JUI-F chief announced August 25 that his party plans a long march to Islamabad, which aims to send a ‘fake government’ home in October. Is. Initially, this protest called the ‘Freedom March’. Its date was set for October 27, but later Maulana Fazlur Rehman announced that the participants of the Long March would enter Islamabad on October 31.

In connection with the aforementioned protests, Maulana Fazlur Rehman invited all opposition parties to participate. On October 18, the PML-N announced its full participation in supporting the independence march, but on September 11, the chairman of the Pakistan Peoples Party refused to attend Maulana Fazl-ur-Rehman’s sit-in in Islamabad. They support their protest morally and politically. The government formed a committee on the same day to discuss opposition with Defense Minister Pervez Khattak, Speaker National Assembly Asad Qaiser, and Chairman Senate Sadiq Sanjrani.

After the PPP expressed reservations and disappointment, Maulana Fazlur Rehman was mobilized to celebrate the PPP and canceled talks with the government committee. Later, the federal government decided to allow the opposition party Jamiat Ulema-e-Islam (F) in Islamabad to hold a ‘freedom march’.