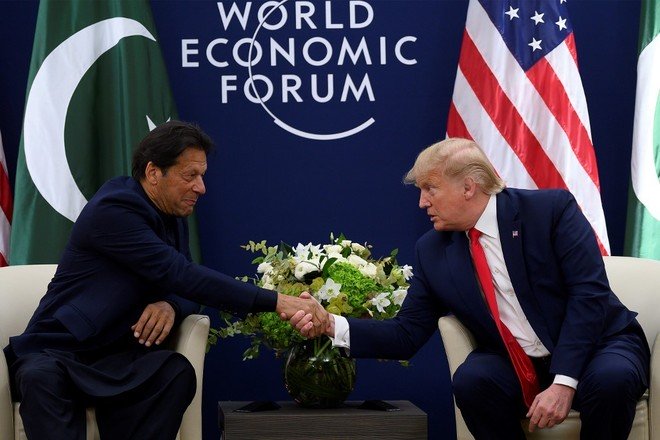 In a statement issued by the Pakistani Foreign Office on Wednesday, Foreign Minister Shah Mehmood Qureshi said that “President Trump has promised to visit Pakistan in future in Davos meeting with Prime Minister Imran Khan.

The Foreign Minister said that “the Prime Minister apprised President Trump of the steps taken to satisfy Pakistan’s Financial Action Task Force (FATF) and requested US support for removal from the organization’s gray list.

Prime Minister of Pakistan Imran Khan and US President Donald Trump met at Davos World Economic Forum. President Trump said, “We are as close to Pakistan as we have ever been before.

Talking to the media ahead of the official talks, Donald Trump said, “We will talk about the Kashmir situation. Prime Minister Imran Khan said, “The situation in Afghanistan will also be discussed with President Trump. At a meeting on Tuesday, President Trump also said that Pakistan and India could play their role in mediation.

According to Reuters, President Donald Trump said that the United States is “very close” to the Kashmir situation between India and Pakistan. He is ready to help if necessary, but the US president does not say how the aid will be provided. “Pakistan wants peace in the region and will continue to play its role in establishing law and order,” Imran Khan told media in talks with the US president. When asked if he would visit Pakistan, he replied that he had been invited by Imran Khan to visit Pakistan.

Prime Minister Imran Khan welcomed President Trump’s offer of mediation on the Kashmir issue and said that Pakistan was ready for talks with India.
Then in September 2019, US President Donald Trump again spoke to reporters in the White House and offered to mediate the issue on Kashmir, saying he wanted to help the two countries.