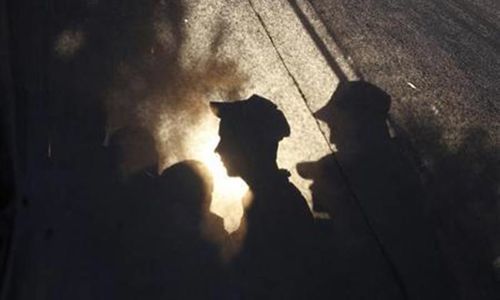 Security forces arrested two Indian spies from the Line of Control (LOC) and handed them over to Gilgit-Baltistan Police. Indian currency, identity cards and other documents recovered from the arrested spies were seized. Gilgit Senior Superintendent of Police (SSP) Raja Mirza Hassan presented the alleged spies to the media at a press conference.

The SSP said that both belonged to occupied Kashmir and they were forcibly sent to Pakistan for espionage. He also said that the two were arrested immediately after crossing the Gilgit-Baltistan LOC.

The detained Indian spies introduced themselves as Noor Mohammad Wani and Feroz Ahmed Lone. They are residents of Achhora village of Tehsil Gurez in Bandipur district of Occupied Kashmir.

They said they had to enter Pakistan after being forced by Indian military officers. At the same time, they said, the Indians intimidated and tortured him to force him to work against Pakistan. Feroz Ahmed Lone told reporters that he has been working as a laborer since 2011 after completing his graduation.

They said that in 2014, he met Noor Mohammad in the area of Gurez through a third person Rauf. Rauf later arranged for us to meet some Indian intelligence officials.

“The officers persuaded us to work for them and told us that we would cross the LOC and go to Pakistan,” said Feroz Ahmed Lone. “We were not ready to work for them, but they threatened to kill us and our families if we did not do so.”

“The Indians had said that if we went to Pakistan, they would help our families financially,” they said.

“Then we agreed to work for him and he gave us Rs 100,000 and said that Rs 1 million would be given after completing the mission,” said Feroz Ahmed Lone. “Indian intelligence told us to cross the LOC under the pretext of seeing our lost cattle,” he said. “After gaining the confidence of the Pakistani security forces, we were asked to secretly monitor their movements and provide information through the WhatsApp,” Feroz Ahmed said.

Another suspected Indian spy, Noor Mohammad Wani, said he belonged to a poor family and appealed to the Pakistani government and the United Nations for his release.