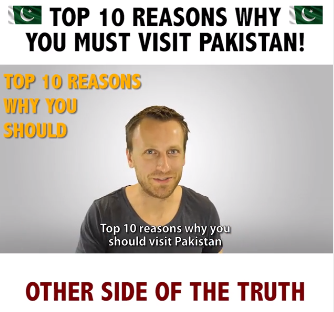 Dr. Dustin Pfundheller an American Vlogger visit Pakistan. He explains the reasons for visiting Pakistan in his 6 mints vlog. Here are the Top 10 Reasons Why You Must Visit Pakistan.

The video duration of 06 minutes and 55 seconds, features ’10 Reasons Why You Should Go to Pakistan? In the video, he tells 10 points to tourists coming to Pakistan, well-known places, attractions, and other upcoming issues. Has guided the visitors and highlighted the positive face of Pakistan.

🇵🇰 Top 10 Reasons Why You Must Visit Pakistan! 🇵🇰 —Other Side of The Truth— I had such an incredible time visiting Pakistan – I went back a 2nd time! I was surprised and happy to discover how wonderful and friendly Pakistani people are! I made this video to help encourage other foreigners to visit Pakistan! Facebook @wanderingdentist #othersideofthetruth #pakistan #islamabad #visitpakistan

According to vlogger, Dr. Dustin PFundHeller made this video to encourage foreign tourists to visit Pakistan. At the start of the video he said that when one thinks about Pakistan and you think about the terrorist that is not true. He says that more and more people are visiting Pakistan and here are the 10 reasons why you must visit Pakistan.

Dr. Dustin said that Pakistan is very cheap, transport, local food, and other things are very cheap. He did not forget to mention the hospitality of the foreigners on behalf of the Pakistanis. Describing the enthusiasm of the Pakistanis for the guests, he said that if you want to buy something for yourself, the people here will not give you money, Spend from your own pocket to a foreigner. 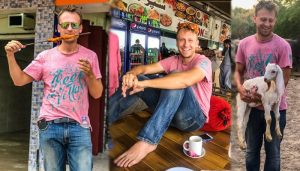 He shares an incident that he with his friends went to a restaurant and at the time of bill the hotel management did not take any money from them. They denied the bill and said that you are a foreigner and you are our guest. He said that I did not spend any money on my Pakistan tour. Everything was free for me.

Dr. Dustin says that Pakistan is a beautiful and gorgeous country. Pakistan has many beautiful places to visit including historic places, natural beauty and many more.

Dustin in his video says that Pakistani people are very good at English speaking. English is well spoken so it’s easy to travel and get along the country.

In the US, people have no choice but to watch TV in their spare time, but in Pakistan’s local markets, there is a festival in the evening, so much can be discovered here.

Dustin says that there are not many tourists on the popular tourist destination in Pakistan. When you go to visit sometimes you will be the only one there. Dr. Dustin who stands outside the shrine of Shah Alam, Multan, said that Multan is one of the ancient cities of Pakistan. There are shrines of world-famous Sufi elders, but if you consider, I am the only tourist here. 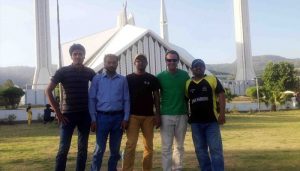 He tells about the famous sights of Pakistan like the Lahore fort, famous Wahaga Border, Shrines in Multan and many more tourist sites in Pakistan.

After praising the hospitality of the Pakistanis, they did not forget to mention the friendly attitude of the people here. He said that whenever I came to Pakistan, the common people welcomed me and invited me to stay home. He said that such behavior by the strange people will only be seen in Pakistan. 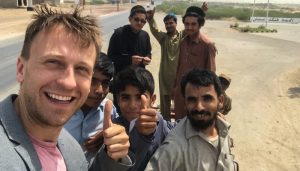 Pakistani food is incredible, He says that I went through the markets with my friends and it seemed like literally, everybody was serving something different.

In a vlog created to promote tourism in Pakistan Dr. Dustin PFundHeller says that if you are an adventure lover then, the Pakistan Tour is the best for you.

The foreign vlogger placed the global stereotype of stereotype regarding Pakistan in a video intended to promote tourism in Pakistan. He said that those born and raised in the United States have anti-Pakistan sentiments in their hearts and minds; they believe that Pakistan is the land of terrorists. He Said; These are all pointless things, I have found on the positive side of Pakistan more than my thinking. He said if you intend to visit Pakistan for tourism, you must go, your views about Pakistan will be radically different.  At the end of the vlog, he resorted to statistics, saying that if you look at recent reports, you will know that the US is more dangerous than Pakistan.

Who is Dr. Dustin Pfundheller?

The well-known Vlogger Dustin Pfundheller is from the United States is a dental surgeon interested in traveling the world.

Dustin Pfundheller has visited 236 countries around the world with no sponsor.

There are a large number of subscribers and followers on Dustin Pfundheller social media accounts, who visited Pakistan twice.