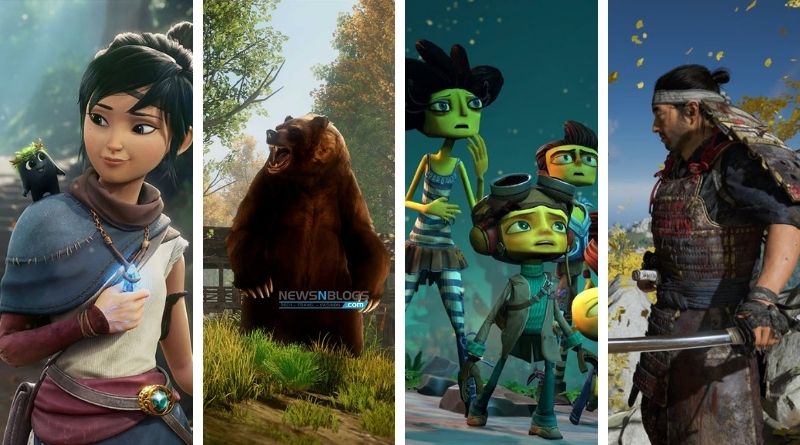 The gaming industry is spreading day by day and on daily basis, new games are releasing. August is here with a bunch of new games for gaming lovers. The gaming community and gaming lovers are increasing day by day rapidly. So, for the gaming lovers who are desperately waiting for new games, we have got good news. In this article, we will tell you about the top 10 new games of August 2021 that are going to release on PC, PS5, PS4, Xbox Series X/S/One, and Nintendo Switch.

So, if you want to know about the top 10 new games of August 2021 continue reading this post… 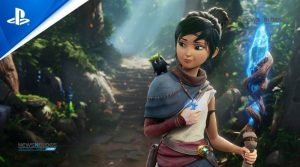 Although maybe not to the exact the same extent, I don’t know that the spirit companions in “Kena” are really particularly combat-oriented. It is more along the lines of distractions, moving objects, and completing tasks.

But it does seem like they function in the battle to at least some extent. And obviously, the combat is real-time and not turn-based. Anyway, this is an absolutely gorgeous-looking game.

The world itself is inspired by Japan and Bali. It is developed by a 14 person independent studio. And the way that they were originally burst onto the scene was a “Majora’s Mask” oriented short film they made.

And the artistry is really showing through with this game, as well as obviously, they are wearing their influences on their sleeve. I think this has the potential to be a really good game. It was supposed to release on August 24 date on PlayStations and Microsoft Windows. Unfortunately, developer Ember Labs needs a few more weeks to bring it home. As such, Kena will now launch on September 21. 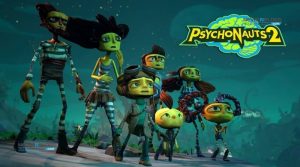 Psychonauts 2 is at number two which let’s just go ahead and say. It’s been a long time since the original “Psychonauts”. There was a VR adventure game based on “Psychonauts” that progress the story and kind of functions as a lead-up to this one, but this is a straight-up “Psychonauts” game.

It is a platformer.  It is the first by Double Fine since Microsoft acquired them, which apparently gave them a lot of money to work with. A particularly interesting aspect of this is that they are publishing for the PlayStation 4, but not 5 while publishing to the new Xbox Series X. I mean “Psychonauts” is a fantastic puzzle platform. There’s just a lot that I am looking forward to jumping into again because these are games that are put together intricately and with a lot of care.

And the reason why it takes so long is that these guys have a very specific vision for these games. That is something that can be irritating, but at the same time like the end result is usually pretty good. Psychonauts 2 is landing on Microsoft Windows, the Xboxes, and PlayStation 4, on 25th August 2021. 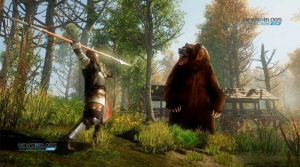 New World is on number 3 in the list of top games launching in August 2021. New world, which is I don’t know. For me, this is gonna be worth watching, not necessarily because I am really excited about it, but because Amazon Games has, well, not exactly put out the best stuff. And I would say they have a large amount riding on this game. So from that perspective, I am pretty interested in seeing if they can put something out that’s good.

“New World” is a massively multiplayer online RPG, MMORPG, at this point, you know what that is. It has had a slightly tumultuous development cycle, was originally going to release in May 2020.  It is obviously more than a year after that. The pandemic obviously played a role in that, but there are probably other reasons why it took that long.

For me, this is not necessarily a game that I am really intent on playing. I am sure that MMORPG fans will find things to like. I am more interested in if they put our something that is good quality. Amazon’s kind of injected themselves into the gaming world with this game studio and it has not gone well up until now. So frankly at this point that is a very interesting prospect. “New World” comes to Microsoft Windows on 31st August 2021. 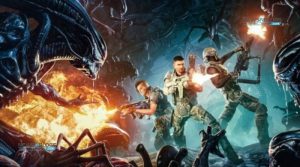 Aliens Fireteam Elite is on number 4 in the list of top 10 games releasing in August 2021. It is a multiplayer co-op shooter that’s also functioning as a sequel to the original “Alien” trilogy. Basically, it is a third-person co-op shooter, I would compare it loosely, and I mean loosely because the gameplay does look a little bit different to me to “Left 4 Dead”, like that type of format.

However, it looks a little bit more like a serious shooter. Not characterizing it as like “Rainbow Six” type tactical shooting, it is still probably closer to “Left 4 Dead”. It is functioning as a direct sequel like I have mentioned it’s set 23 years after original films have you as an anonymous Space Marine answering a distress call from the colonies.

For me, this has the potential to be a real hit. It also has the potential to land like a lead balloon. I don’t know I am interested in it though. But I like the “Alien” series and the lore is always interesting to me. I don’t know exactly how deep we’re going to see them go into that. It is primarily an action shooter from the looks, but we’ll see. Aliens Fireteam Elite is coming to PlayStations, the Xboxes, and PC on 24th August 2021. 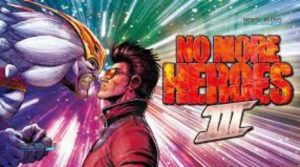 In the list of top 10 games of August 2021 “No More Heroes 3” is on number 5. No More Heroes 3 is interestingly enough a Nintendo Switch exclusive. This is a series we’ve seen on the Wii, on PS3, Xbox 360, it’s been on mobile, and it’s always been kind of a satirical kind of edgy place. And to me just, it’s bizarre that the newest incarnation of this landing on the Switch. However, I am not upset about it.

This is a game that has provided a pretty fair amount of laughs through the years, and it’s got really good action in it as well. The big thing about this one is that it is returning to the open-world formula.

So, I do think that’s gonna be an interesting aspect of it. If you are aware of the previous two games though, this is a good hack and slash series that will make you laugh at some point. It is exclusive to the Nintendo Switch and it is landing on August 27th, 2021. 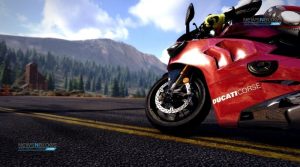 RiMs Racing is on number 6 in the list of top 10 games launching in August 2021. It is a game that developer, RaceWard studio, label a completely new approach to the motorcycle simulation game experience. Now, one of the big things that have people talking about this game is the extensive customization options.

Like we’re of course very aware of motorcycle simulation games, but do we see customization down to like, brake fluid? You can swap out almost any part from what I have found doing research into this game.

A direct quote from RaceWard is that,

Players are able to fully disassemble their motorbike and replace every element to achieve the best possible setup, by choosing over 500 official components, from times to discs, to pads, suspension, air filters, etc.

It is also a very pretty looking game honestly, a lot of really nice reflections I’ve seen in the trailer, but also a lot of really cool dirt stuff. All in all, definitely an interesting motorcycle racing game, that’s coming to PC, the PlayStations, the Xboxes and it’s coming on August 19th, 2021. 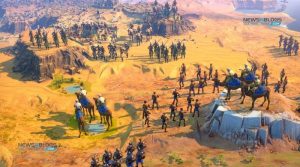 In the list of top 10 games of August 2021, Humankind is on number 7. Humankind is a 4X historical turn-based strategy game that is probably going to give you “Civilization” vibes. It’s essentially you building a human civilization across six major eras. The idea is to expand society develop cities, conquer, you know the whole 4X thing.

Now, it is published by Sega, but it is developed by Amplitude and their city building is actually going to be following the model from “Endless Legend”. If you are familiar with that, essentially, they regard this as like a big jump over “Endless Legend” and “Endless Space”, calling it their Magnum Opus and saying, “It would not have been possible had Sega not acquired the studio.”

It’s been delayed a little bit for polishing. And I think that’s not a bad thing. It looks like it has the potential to be a real bug, an interesting game that might actually take on the “Civilization” series. I don’t know. It would be cool to have more than one game in that genre dominating everything. We’ll see, though when it comes out on August 17th, 2021. 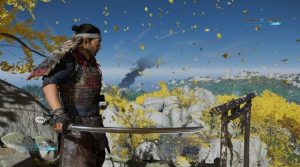 Essentially, Jin arrives on the island. It’s ruled by a Mongol shaman, and you have to learn about things to keep your people safe. This is more about Jin Sakai, the main character’s past and where he’s coming from in the main game and is being described as a story of healing on the official PlayStation blog. 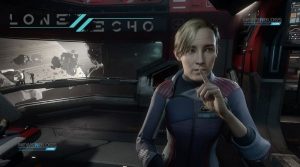 At number 9 in the list of top 10 games of August 2021, is “Lone Echo II” the sequel to the VR adventure game. Where the goal is to move around a zero-gravity environment by grabbing and pushing and using physics in a VR environment. It is really actually very cool and basically, you have to solve various puzzles, etc., and continues the plot by somehow time-traveling the main characters to a space station 400 years in the future. Where the biomass that they encountered in the first game has evolved into like little bugs.

Basically, you have to solve the mystery of an abandoned space station. And I think that it’s kind of funny because it mirrors a lot of like these. Oh you go to an abandoned place and find out what happen way back, except for you are probably actually from a long time before the events that you are investigating.

Imagine if Isaac Clarke was like a 1990’s inventor guy who time-traveled forward to Ishimura and found out that in the past. but in the future, there was some kind of horrible incident on this ship. What is interesting to me is that possibility that is also perhaps part of the plot. My fingers are crossed “Lone Echo II” is coming to Oculus Rift on August 24th, 2021. 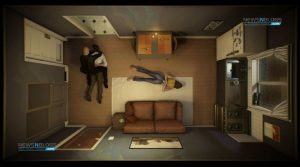 We have been seeing more games recently about time loops. Deathloop is a big one. But that’s big 3D and it’s an Arkane game and it is coming in September 2021. 12 Minutes is actually a much smaller and much more intimate affair game.

In 12 Minutes a man finds out, his wife is pregnant, a police officer comes in, accuses the wife of killing your father and the police officer ends up killing her and unborn child. Time then resets you retain all the knowledge and from that point. You are supposed to attempt to find the best outcome in order to beat the game.

Now, it’s only a 12-minute loop, but the game is apparently going to be somewhere between six and eight hours and plays out like a point-and-click adventure game. It’s top-down, it is actually a pretty good-looking game considering that it’s latterly just in a single apartment, from a single camera angle.

And honestly, to me, it seems like a really intriguing concept that could end up playing out very well. I am interested in it and I will definitely be playing it when it comes out on Microsoft Windows, Xbox One, and Xbox Series X and S on August 19th, 2021.