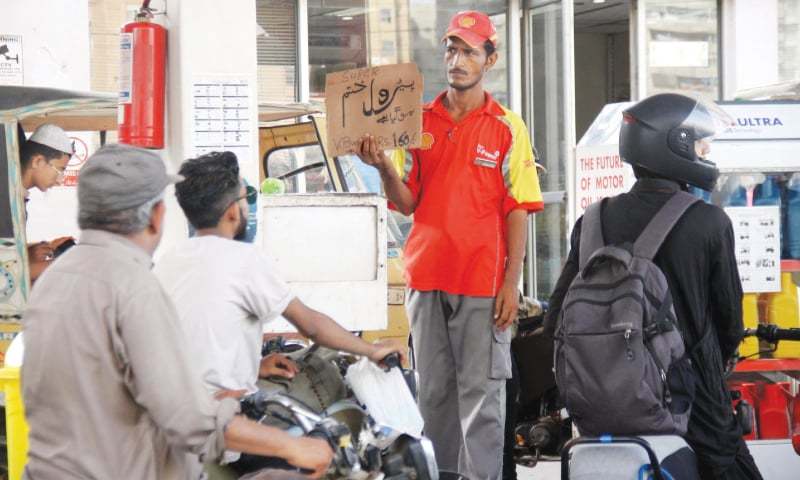 The supply of petroleum products has been severely affected in most parts of the country. This is due to the failure of the oil marketing companies and the concerned authorities to ensure the required stock at the designated depots.

According to the report, after the revision in prices, the first two days of the month saw the immediate depletion of small stocks, with many cities and areas seeing the biggest drop in the petrol supply in general.

Oil companies were then asked by Petroleum Division officials and the Oil and Gas Regulatory Authority (OGRA) to adopt specific procedures to avoid a complete stockpile.

They directed the petrol pumps to provide petrol up to a maximum of Rs.500 or Rs.1000 per vehicle. However, most of the pumps ran out of petrol on Tuesday.

The shortage will now last for more than 10 days, officials said. This is because oil companies have not ordered imports and have reduced domestic production from refineries in the face of the possibility of price reductions to avoid inventory losses.

Read Also: The government reduced the price of petrol by Rs 7 per litre

The situation was clear to OGRA and the Directorate General of Oil, which had been exchanging letters on the low stocks of major oil marketing companies in the first and second weeks of May.

Under the rules, all oil companies and refineries are required by license to cover at least 21 days of use of petroleum products at all times, whether the country is at war or at peace.

Unfortunately, however, none of the 80 to 90 oil production companies and refineries have met this requirement. Over the past few days, the country’s overall stock of petrol and high-speed diesel has averaged no more than 11 days.

Also, most of the stocks were near the port or in some cases owned by large depots. But its movement to the pump stations remained uneven. For example, on June 2, the average consumption of petrol and diesel in Punjab was three and four days, in Sindh, the average stock of petrol and diesel was 7 days and 16 days respectively, while in Khyber Pakhtunkhwa it was only 4 days.

Official data shows that aggregate stocks for diesel and petrol in Balochistan were sufficient for 7 and 3 days, respectively. In Azad Jammu and Kashmir and Gilgit-Baltistan, the stock of both the products was sufficient for 6 days.

At the same time, it was revealed that stocks across the country were averaging 5 to 7 days till Tuesday, while stocks at refineries were between 2 and 14 days on Tuesday, but none were within the required storage limits.

Supplies began to be disrupted during the Eid holidays, officials said.

The Director-General of Oil and OGRA asked the oil-producing companies and refineries to increase the supply before Eid. In the last week of May, detailed stock positions were demanded from all the companies even though daily supply is available to all the stakeholders on a regular basis.

On May 29, the Hydrocarbon Development Institute of Pakistan was asked to verify the retail station and stock position of all products and all companies as it required time for the process and was already delayed.

As a last resort, the Petroleum Division, through the Cabinet’s Economic Coordination Committee (ECC), tried to keep the prices of petroleum products unchanged for two weeks, but the ECC also refused to get involved at the last minute. done.

The Petroleum Division formally demanded a halt to this and sought compensation for some of its losses by selling the oil industry at current prices.

It warned the ECC that falling petroleum product prices would disrupt supplies, which could take weeks and months to return to normal. Because the stocks of most oil companies were unusually low.

However, the ministry did not mention in its summary that oil companies and refineries are required to maintain stocks for up to 21 days, nor did it report that oil companies have been making inventory gains for more than three years. Windfall is making a profit and such a benefit has never been shared with consumers or the national treasury.