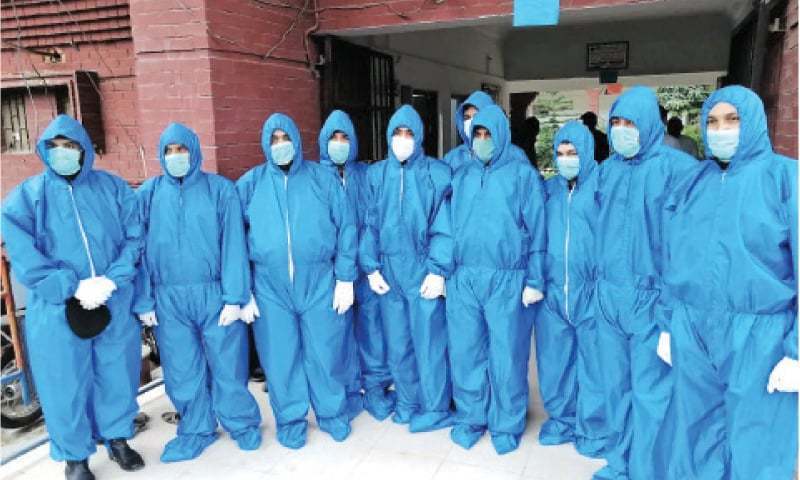 Doctors blamed the administration for the incidents, saying new wards were set up at Allied and DHQ without security measures, while beds were available at General Hospital Ghulam Muhammadabad. The General Hospital provided 250 beds for the treatment of Covid-19, of which only 60 are in use.

Dr. Muhammad Irfan, secretary of the Pakistan Medical Association Faisalabad, said most doctors were not provided with protective clothing and were infected with the virus.

He said doctors try to protect themselves from coronavirus while treating patients. But they fail and will not be able to stop this spread without the supply of PPE.

Doctors said the general hospital has a good treatment strategy. This can help the administration prevent the spread of the virus. But the situation worsened when patients were allowed to visit the other three hospitals.

Dr. Adnan Shakir, Secretary, Young Doctors Association, Faisalabad, said that a delegation of medical experts had met Dr. Zafar Chaudhry, Vice-Chancellor, Faisalabad Medical University (FMU) and highlighted the issues. Why wards have been set up in Allied and DHQ hospitals when there is room for beds in the general hospital.

He said that he was clearly told that poor wisdom has proved to be dangerous for the people and 110 doctors in all the three hospitals have contracted the coronavirus.

He said that another question was also discussed with him as to why the doctors of Faisalabad were getting more victims of viruses than other districts.

FMU Vice-Chancellor Dr. Zafar Chaudhry said that in fact no patient was transferred from the General Hospital which is a tehsil level facility where proper arrangements are not made for the treatment of patients in critical condition.

He said there were similar conditions at DHQ and Allied Hospitals before patients were transferred.

He said that it was decided on March 16 that the coronavirus patients would be treated at the general hospital so that the virus could be prevented and 6 ventilators were also transferred from Allied Hospital.