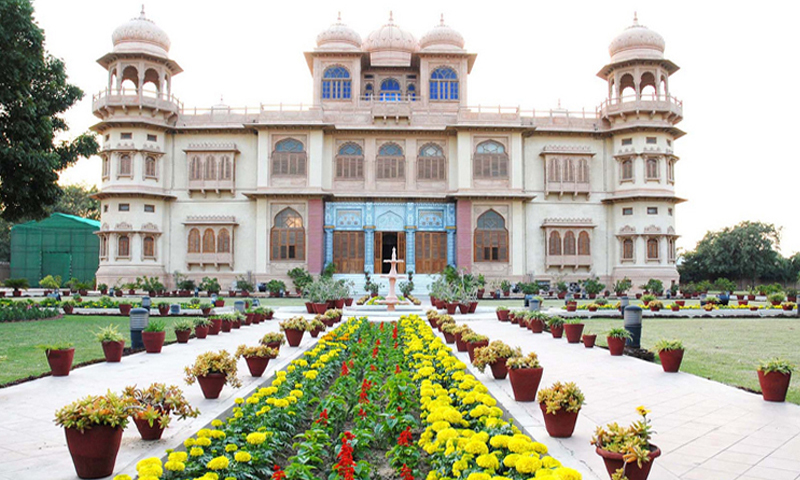 Mohatta Palace Museum: Karachi’s Taj Mahal, located in Clifton. Who has not heard the story of the Taj Mahal? Everybody knows that about 400 years ago, a monarch built a royal palace of love for his queen. Perhaps near Shah Jahan, this building would be the tomb of a prominent palace, but today it is recognized worldwide as the greatest symbol of love.

When one emperor used the money to make fun of the poor, then where did the other money lasts? Regardless of the suspicion of Sehir Ludhianvi, Marwari businessman Roy Bahadur Shevartan Mohatta of Karachi built a magnificent palace in Karachi for his wife.

Of course, unlike Mumtaz’s palace, the chevron’s wife was alive but suffering from a fatal illness. Doctors advised that if they were kept close to the beach, sea breeze could improve their health. Just then, Seth Shevartan decided to build a beautiful palace along the Arabian Sea that would not be found in the whole of Karachi.

Roy Bahadur Shevartan Mohatta was one of the richest people in Karachi and he was also a prominent social figure of the city. His family came from Calcutta and settled in Karachi and earned a reputation in the industrial sector.

Chevron had a shipping and shipping business. There were also sugar and steel mills. He had many houses in Karachi but the Mohatta Palace, built-in 1933, has always been his favorite.

Seth Shevartan Mohatta decided to build a bungalow on the coast of Clifton so he had the palace of the Nawabs of Rajasthan in mind. That was the reason why he was chosen by the architect, Agha Ahmed Hussein, who was then serving in the Karachi municipality, but he had more time in Rajasthan.

The first time you see Mohatta Palace, it looks like you are standing in a palace in Rajasthan. Right now, a door will open and a king will accompany his followers to the palace garden.

The entire building is designed to be an impressive design of Jaipur architecture, with a glimpse of Mughal style. The pink stone used in the construction of the palace was brought from Jodhpur while the yellow stone was brought from Gazri area.

The building’s unique identity is the dome, the shrines and the minarets that distinguish Mohatta Palace from other Karachi buildings of that era. The two-story palace has 16 spacious rooms.

Flowers and birds are carved on the stone on the outer walls. Agha Ahmed Hussein was well acquainted with local history. That is why they used the engravings of the Makli shrine in Mohatta Palace. Stainless glasswork has been done on Bermitek wooden door windows.

Inside the palace, the temple of Shiva was also built for Pooja, with no trace of it anymore. The sides of the building had a beautiful and spacious garden in which the fountains still work.

Agha Ahmed Hussein is considered among the first Muslim architects in the subcontinent who had drawn maps of the two more famous buildings of the Hindu Gym and the Karachi Chamber of Commerce before Mohatta Palace. His family still lives in Karachi and lives on in his family’s heritage.

Why not have the effect of such a well-crafted home? The wind of Karachi affected the wife of Shevartan Mohatta, or it was the opinion of Bahadur’s love, that whatever the cause, he recovered.

The celebration celebrated on this occasion was the hallmark of both Seth Shevartan’s social personality and his palace. Celebrities of the city were invited to the celebration. The first elected mayor of Karachi, Jamshed Nasrunji Mehta was also among the guests.

The cool sea breeze that gave Chevron Mohta’s wife a run is still running but she has lost her influence due to the polluted atmosphere. The Roof of Mohatta Palace can still be seen over the sea, but the view is not as attractive as it was a century ago. Now the surrounding concrete jungle has erupted, which looks rather daunting.

Even the chevrons and their skinny characters seem to be the characters of a Diwali story, who go from the clutches of the oppressor magician to spend the rest of their lives laughing. But a twist to this story is still left. The happiness of the spouse lasted only a few years, and then came the age of nineteen forty-seven.

Seth Shevartan could not do much else but he left the country with a heartfelt attitude. For years Mohatta Palace resonated with the noise of typewriters in the Foreign Ministry.

He spent a decade and a half and moved to Rawalpindi and then to the newly built city of Islamabad before the capital Karachi. On the way, government officials found the keys of the palace to Fatima Jinnah, sister of Pakistan’s founder Mohammad Ali Jinnah, who was given the building in exchange for Jinnah’s Bombay residence. Unlike Fatima Jinnah, the building was called ‘Qasr-Fatima’, which is still the official name of the building in government papers.

Like Shavartan, Fatima Jinnah kept Mohatta Palace in her chest. She used to live alone in such a big house, but she liked it. He spent most of his evenings on the roof of the castle, where a magnificent view of the sea fed him. She used to sit here every Thursday at the shrine of Sufi saint Abdullah Shah Ghazi.

In Mohatta Palace, she celebrates the anniversary of her beloved brother, Muhammad Ali, on September 11 every year. In the garden adjacent to the palace, shamanis were planted and people from a certain shop in the city were asked for biryani.

From this building, Fatima Jinnah participated in the presidential election campaign against the then military dictator General Ayub Khan and was defeated. After the death of Fatima Jinnah, her sister Shirin Jinnah lived here until her death in the nineteenth century, after which the building was locked due to mutual intrigue.

For many years, Mohatta was surrounded by palaces. But then the government of Sindh province got the idea and in the nineties, the building was purchased and renovated for a sum of Rs. Seven lakhs.

Motta Palace was declared a cultural heritage and turned into a museum where art exhibitions are held throughout the year. As such, this historic building has now become the center of cultural activities in Karachi. Mohatta Palace is overseen by an independent board of trustees that includes the city’s leading social figures.

What is a pleasant surprise for those coming to Mohatta Palace are the metal and stone sculptures that were once installed in prominent public places in the city. But then the spirit of the nation was stirred by the faith, and the idols were lifted from the streets and thrown into warehouses and public offices.

The Mohattas Palace went from place to place and collected these sculptures and put them on display in their premises. The most famous of them is the statue of Queen Victoria mounted on a freighter in Karachi, which was removed from the city after the riots took place in the 1980s.

Roy Bahadur Shevartan Mohatta’s love affair with his wife Mohatta Palace is still present on the Hatam Alawi Road in Karachi. But now neither Chevtan nor his beloved wife.

Today, the gates of the palace are open to the general public, who can see the heartwarming shrines where Cheverton and his wife once lived. Barefoot can be walked in the garden around the building, where night-time concerts were held, and they can wash their hands with splashing water where Fatima Jinnah drinks the evening tea. Now no one here, no one will come.