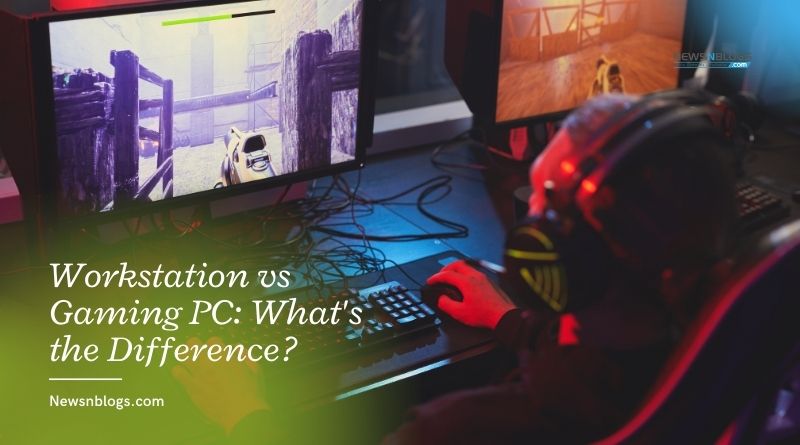 Are you aware that 77% of American households have a desktop or laptop computer?

Of course, simply owning one isn’t always going to be enough. You’ll want to upgrade at some point, but you need to choose between a workstation vs. a gaming PC. Both have their pros and cons to consider. They’re both high-end builds that will cost a bit of money. Which one is right for you?

Don’t fret; we’re here to help you figure it out. Here are some factors to consider:

What is a Workstation?

This is a type of computer designed for professional purposes. It matters not whether it’s for scientists, engineers, graphic designers, and others. Some brands sell pre-assembled workstation computers.

However, you can assemble a workstation the same way you do for a gaming PC. You may need to vary specifications and build depending on your line of work.

For example, an editor or a programmer using heavy programs need powerful processors. They complement this with more SSD storage and RAM. If your online work only involves Zoom calls and browsing, you can get by with less powerful specs.

The most common traits found in workstations are powerful CPU and higher RAM. This allows users to do demanding tasks using specialized components. Their build makes them durable even with heavy use for long periods.

What is a Gaming PC?

Like workstations, gaming PCs must have stronger components compared to ordinary desktops. The reason is to accommodate modern games. After all, most triple-A games need higher technical specs.

Read Also: How to Choose the Best Keyboard for Gaming

This is the reason powerful gaming PCs must have specialized parts. You will need to optimize these computers to complement gaming processes. Remember, running games is a different process compared to using work software.

Workstation vs Gaming PC: The Differences 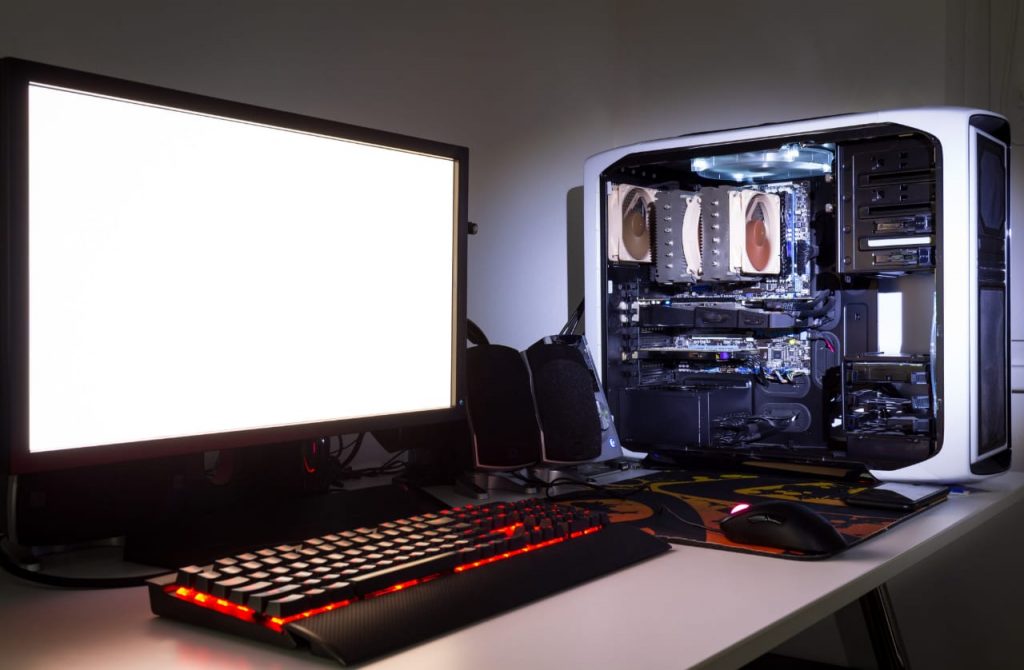 Some PC owners may think they can get away with their current setup. However, choosing the right type can have a great impact on your work and progress. To learn which type of PC fits your needs more, here are components you must pay attention to:

Lower-end workstations can use processors like the Intel Core i7 or i5. However, you’ll limit your PC’s performance potential. This applies when you do intensive tasks like video editing.

With this, you’ll likely dump the majority of your budget on the CPU. It’s because high-end workstations are the best when you opt for the latest components. This means investing in Intel i7, i9, or Xeon.

Having these CPU choices enables you to handle a diverse set of workloads. At the same time, switching between programs is faster and quicker. You can also process massive data amounts and other professional tasks.

As for gaming PCs, a powerful CPU benefits them as well. However, you must have a powerful graphics card to complement it. This is especially when you aim to play the latest triple-A games this year.

Most entry-level gaming PCs will use either an Intel i3 or Ryzen 3 CPUs. You can go as high as the Intel i9 if you have the budget. It’s because of its high clock speed and performance per core.

As stated above, higher-end GPU components are ideal for gaming PCs. If you’re an Nvidia fan, go for the GeForce GTX 1660 or the RTX 2070. If you’re a Twitch streamer and play graphics-intensive games, get GPUs that help optimize 1080p.

You’ll maximize your frame rates for a better stream if you do. This also applies to professional eSports gamers. Check out what Lenovo can offer you, especially if you want a gaming laptop for more portability.

Do you appreciate deep, immersive graphics? If so, get higher-end GPUs with ray tracing and native 4K. You can only take advantage of these components if you get a monitor with the same resolution.

Workstations don’t usually require a high-end GPU. You may only need this if your work involves graphics-intensive projects. When you opt for the same components as a gaming PC, you’re wasting your budget and potential.

This means you’ll benefit more if you use Autodesk or Adobe Suite software. A higher-end GPU will also make sense when your workstation also serves as a gaming PC.

Most gaming PCs will have 8 or 16 GB of RAM. This applies to higher-end units. You can upgrade your RAM to 32 GB if you insist since this won’t cost you a lot.

Gamers often consider adding more RAM to future-proof their machine. This will allow them to maximize the CPU’s power and maintain power over the next few years. Take note; you must ensure that your motherboard is compatible with the RAM sticks you buy.

Workstations will often require 32 GB RAM at the minimum. Some of the higher-end machines will opt for up to 256 GB. The reason is that it makes using multiple software pieces easier and optimized.

Having a greater amount of RAM ensures system stability. This holds even when you run multiple resource-intensive applications. The best part is that it helps avoid data corruption while giving a faster experience.

Solid-State Drives (SSD) are now the standard if your PC is for gaming and streaming. This meant that the gap between a workstation and a gaming PC is smaller than ever. After all, getting more storage is always a plus.

Your applications benefit more if you have more drives for specific purposes. You’ll likely see a significant boost of performance for both.

Do you need massive storage for your data? If so, get an HDD with two or three terabytes capacity. However, this is more beneficial for workstations than work PCs.

Your PC’s most important component is the motherboard. For a higher-end CPU, your motherboard choice must match it with a specific chipset. This allows it to maximize your computer’s performance.

Your motherboard must also be compatible with your RAM sticks. This guarantees a greater degree of component consistency. It’s easy to see that workstations and gaming PCs have no direct motherboard differences.

The caveat is that you’ll need a higher-tier motherboard for the former. That way, it can accommodate the more powerful CPU. As for gaming motherboards, it must be compatible with the overall component build.

The key difference between a workstation and a gaming PC power supply is the capacity. The former could boost 20 drives inside. To use all the extra hardware, you must get a larger power supply.

This holds with HHD storage bays too. As a general rule, you’ll find more connectors for these external devices. Workstations often use these because of the sheer amount of data processing requirements.

Workstations have higher-end components compared to gaming PCs. It’s especially when you need more RAM for more intense tasks. In most cases, spending $2,000 on a workstation won’t get you top-tier components.

In comparison, spending less than a thousand dollars means getting a decent gaming PC. With a $2,000 budget, your gaming system can handle eSports-level gaming. This means you can compete in any League of Legends tournaments.

Can Your Workstation Work as a Gaming PC?

The simple answer is yes. Workstations boast power and memory that can rival or surpass gaming PCs. That’s why you won’t notice any difference in gaming on a workstation vs PC.

However, this is only possible if the workstation has a reliable GPU. If you have a high-end workstation without consistent frame rates, games may not run as well. Your gaming experience may also suffer if it doesn’t match your monitor’s refresh rate.

The worst part is that a gaming PC makes it harder to transition into a workstation. This depends on your work needs. Data-intensive work isn’t possible if your PC lacks proper memory and storage.

Are you a professional relying on basic software to work? If so, your gaming PC is a viable choice to run these. It’s especially when you’re using spreadsheets, word processors, and conference calls.

Which PC is Better?

The better choice will depend on the performance power necessary for tasks. Workstations fill this role well since they have better components. Gaming PCs play a more specialized role since gamers optimize their components.

Regardless, a mid-tier workstation can perform like a high-end gaming PC. This holds when you put a decent GPU in it. It’s a cheaper method than buying more components to convert a gaming PC to a workstation.

Gaming PCs don’t have the necessary hardware for complex activities. They’re good at running games, but not other, more resource-heavy tasks.

Learn the Benefits of a Gaming PC and Workstation Today!

Despite the differences between workstation vs gaming PC, both are great at fulfilling their purpose. The better choice will depend on the tasks you intend to do with your computer.

Did this guide help you understand both gaming PCs and workstations? Want to know how to optimize your setup even further? Check out our other guides on choosing the right technology for work and play.