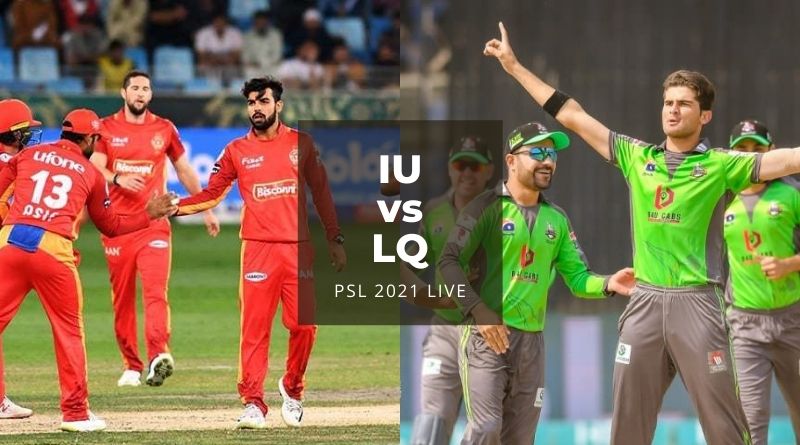 Islamabad United will take on Lahore Qalandars in match 20 of PSL 2021. Pakistan Super League match no 20 will be played in Abu Dhabi’s Sheikh Zayed Cricket Stadium.

The match between Islamabad and Lahore will start at 06pm (PST).  Live stream of PSL 2021 can be watched on Bsports.pk and also on Geo Super.

Lahore Qalandars had won the match against Islamabad United by five wickets the last time the teams met on June 9th to mark the resumption of PSL 2021 after the league was suspended earlier in the year. The star-studded side, led by Sohail Akhtar, looks in good form as they’ve won both the matches since the league resumed in the UAE.

After the win in the restart game against Islamabad, Lahore’s next triumph was against Peshawar Zalmi when successfully defended a score of 170/8 and won by 10 runs. Tim David’s unbeaten 64 from 36 balls and magical bowling by Rashid Khan were the highlights of the game.

Rashid Khan and Tim David, along with James Faulkner and Ben Dunk, look certain the final line-up as Qalandars is in no mood to slow down after the dream start in PSL6. They have won 5 out of their six games.

However, Islamabad had bounced back strongly after being beaten by Qalandars. Boosted by their record 10-wicket win against Quetta Gladiators, they will be high on confidence.

They had chased down their target of 134 in exactly ten overs with their openers outstanding with Usman Khawaja scoring 40 not out and Colin Munroe smashing an unbeaten 90 from just 36 balls.

They will be without their star bowler Hassan Ali who announced last night to withdraw from the league due to family reasons. They’re also without the services of Faheem Ashraf who is recovering from a hand injury. With two main bowlers out of the show, the young duo of Mohammad Wasim Jnr and Muhammad Musa is likely to have a big chunk of responsibilities on their shoulders.

Shadab-led Islamabad will also bank on the fact that it has a record of 8-3 against Lahore Qalandars in 11 matches the two sides have played against each other in the PSL, so far.