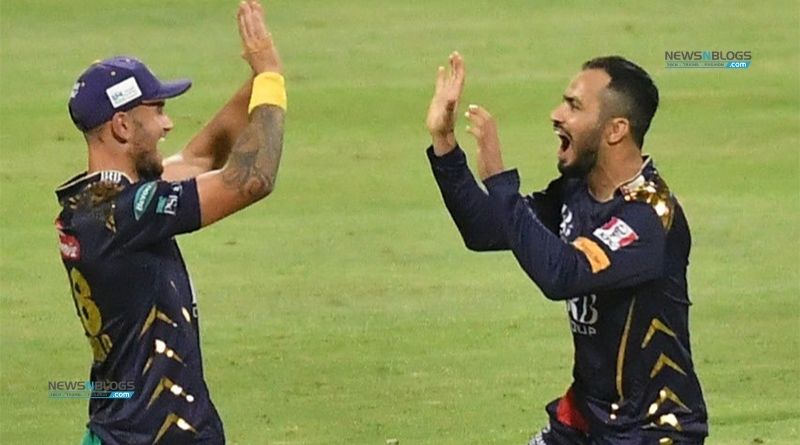 Quetta Gladiators defeated Lahore Qalandars by 18 runs in the sixth edition of the Pakistan Super League 2021 thanks to the excellent performance of the bowlers.

In the 23rd match of the event played in Abu Dhabi, Lahore Qalandars won the toss and invited Quetta Gladiators to bat. The Gladiators’ innings did not start well and in the second over of the match, James Faulkner showed Usman Khan the way to the pavilion. After the first wicket fell for 4 runs, Cameron deport came to the aid of Jake Weatherald and both of them added 48 runs for the second wicket. This partnership was ended by Rashid Khan by targeting Delport who scored 10 runs.

The Gladiators had not yet recovered from the loss when Hafeez ended the innings of Weatherald who was playing on 48 runs.

After that Azam Khan came on the wicket and adopted an aggressive style and hit 4 fours in one over to Harris Rauf. However, despite a good start, Azam could not take advantage of this opportunity and after scoring 33 runs became the wicket of James Faulkner while in the same over, the Australian bowler also moved Nawaz.

In the closing overs, Sarfraz Ahmed made some big shots thanks to which Quetta Gladiators scored 158 runs for the loss of 5 wickets.

Sarfraz Ahmed played an innings of 34 off 27 balls, while James Faulkner of Qalandars took 3 wickets for 25 runs.

In pursuit of the target, the Lahore Qalandars struggled from the start and on the second ball of the innings, captain Sohail Akhtar’s innings came to an end at the hands of Usman Shinwari.

Fakhr Zaman and Zeeshan Ashraf had taken the score to 23 when Mohammad Hasnain scatter the wickets of the opening batsman. gone.

Rashid Khan and Ahmed Daniel also did not help the team in difficult times and returned to the pavilion after scoring 8 and 3 runs respectively.

After dropping 7 for 66, James Faulkner came to the rescue of Tim David and the duo added 39 runs for the eighth wicket.

Tim David scored 46 off 27 balls with 3 sixes and 4 fours but his innings also came to an end at the hands of Usman Shinwari.

In the closing overs, the bowlers of Qalandars made their team match thrilling by playing a few big shots but the Gladiators kept their nerves under control and won the match.