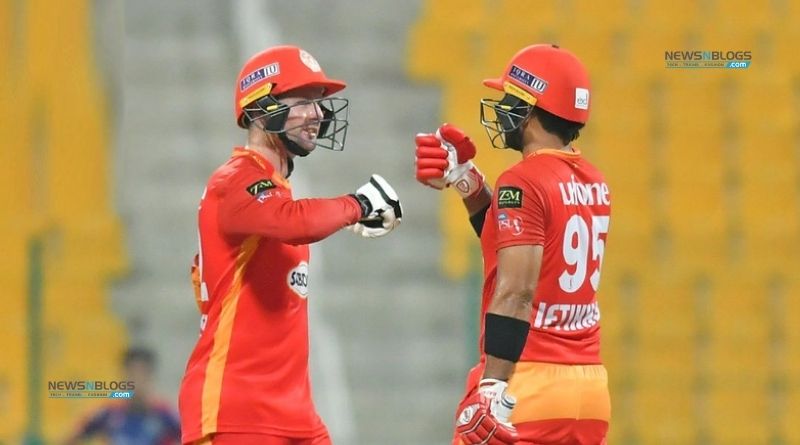 In the sixth edition of the Pakistan Super League (PSL), Islamabad United defeated defending champions Karachi Kings by 8 wickets thanks to excellent batting by Colin Munro and Iftikhar Ahmed.

In the 22nd match of the league played in Abu Dhabi, Islamabad United captain Shadab Khan won the toss and invited Karachi Kings to bat.

Openers Babar Azam and Sharjeel Khan gave the team a 37-run lead but at this stage, Sharjeel khan returned to the pavilion after scoring 25 runs. The Karachi Kings team had not yet recovered from the loss that Muhammad Wasim scattered the wickets of Martin Guptill who scored six runs.

Afghan batsman Najibullah Zadran accompanied Babar Azam on the occasion and the two players formed a brilliant partnership while playing a responsible game.

The duo put up a 117-run stand for the second wicket but in the 19th over of the innings, Hassan Ali ended the innings by Babar. Babar Azam scored 81 runs with the help of 3 sixes and 7 fours while in the next over Ali Khan did not even give Thesara Perera a chance to open an account.

Karachi Kings scored 190 for 4 in the allotted overs. Najibullah Zadran played an unbeaten inning of 71 off 42 balls with the help of 4 sixes and 5 fours.

While chasing a big target of 191 runs, the openers gave a start of 28 runs but Usman Khawaja managed to score only 12 runs while Mohammad Akhlaq could also score only one run. After losing two wickets for 41 runs, Iftikhar Ahmed came to support Colin Munro, and both the players started playing the game responsibly and moving the innings forward. However, in the first ten overs, both the players had difficulty in playing fast due to which the required run rate increased rapidly.

Looking at the reduction in the run rate, Munro took an aggressive approach and try to hit a big shot and ball remain in the air for some time and an easy catch drop by the fielder. Munro dropped by Karachi kings fielder at 34 runs.

In one over of Perera, both the batsmen scored 23 runs. In the same over, Munro was caught the mid-off fielder but the third umpire declared the ball a no-ball. Karachi Kings players were unhappy with the decision, which led to a verbal altercation between the players of the two teams.

The Kiwi batsman took full advantage of the opportunity and changed the scene of the match with his aggressive batting along with Iftikhar. The two players put up a brilliant partnership of 150 runs and led their team to a glorious victory with 8 balls to spare.

Iftikhar Ahmed hit 71 off 39 balls with five sixes and the same number of fours while Munro scored 88 off 56 balls with 12 fours and two sixes.

With this victory, Islamabad United has almost secured a place in the points table and almost reached the playoffs.

Iftikhar Ahmed was declared the best player in the match.

Remember that before this match, United has received great good news as fast bowler Hassan Ali could not return to Pakistan and his services will be available to the team till the end of the league.

Both teams consisted of these players for the match.