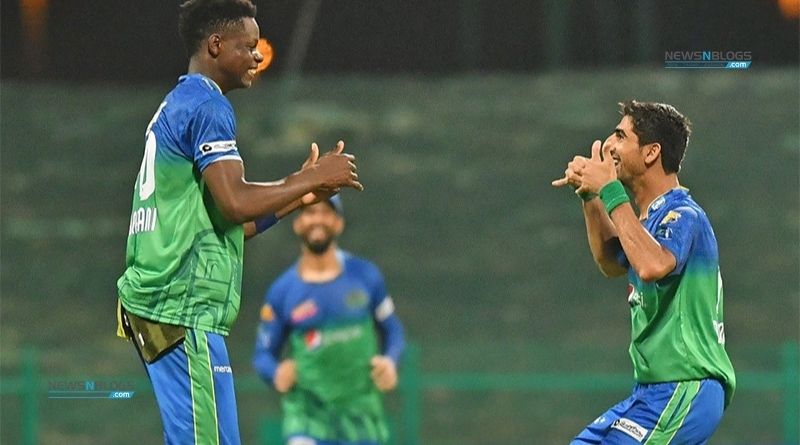 In the 21st match of PSL 2021 played in Abu Dhabi, Multan Sultans won the toss and elected to bowl first.

Peshawar Zalmi started the innings, while openers Haider Ali and Kamran Akmal took over and started the innings with a slower pace. Both the batsmen especially Haider Ali faced difficulties in scoring runs which can be gauged from the fact that the young batsman scored 28 runs off 30 balls.

After an initial struggle, Kamran Akmal hit three fours to Shahnawaz Dhani in one over, and on the very next ball, he got a new lease of life when wicketkeeper Rizwan could not catch his easy catch.

Despite bad bowling performance in the first over, Dhani ended Kamran’s 71-run partnership by dismissing Kamran in the best way possible and also got Shoaib Malik on the next ball.

The score had reached 84 when Haider Ali also returned to the pavilion while Roman Powell was dismissed for 4 runs while Zalmai’s team had lost four wickets for 88 runs.  Rutherford came to David Miller’s side and the two shared a 37-run stand for the fifth wicket, but at this stage, the courage of the previous match’s hero David Miller was reciprocated and he became the wicket of Blessing Mazharbani after scoring 22 runs.

Sherfane Rutherford batted aggressively in the closing overs to complete a half-century and was dismissed for 56 off 40 balls with four sixes and two fours. Peshawar Zalmi scored 166 runs for the loss of 7 wickets in the stipulated overs while Shahnawaz Dhani was the most successful bowler for Multan Sultans with 4 wickets.

When Multan started chasing the target, openers Shan Masood and Rajwan gave the team a good start of 45 runs but at this stage, an unnecessary shot ended the left-arm batsman’s 14-run innings.

After that, Sohaib Maqsood came to accompany Rizwan and both of them took the lead to cross the line of their team while presenting the best game. Both the players showed aggressive batting, especially Sohaib Maqsood, who paved the way for his team’s quick victory with big shots.

Both players completed their half-centuries but a few runs away from victory, Sohaib lost his wicket. He played an innings of 61 off 31 balls with the help of five sixes and four fours.

Captain Rizwan hit a six to lead his side to a stunning victory and the Sultans reached the target just 21 balls earlier. Rizwan scored 82 off 56 balls with the help of 9 fours and two sixes. Shahnawaz Dhani was declared the best player of the match for his excellent bowling.