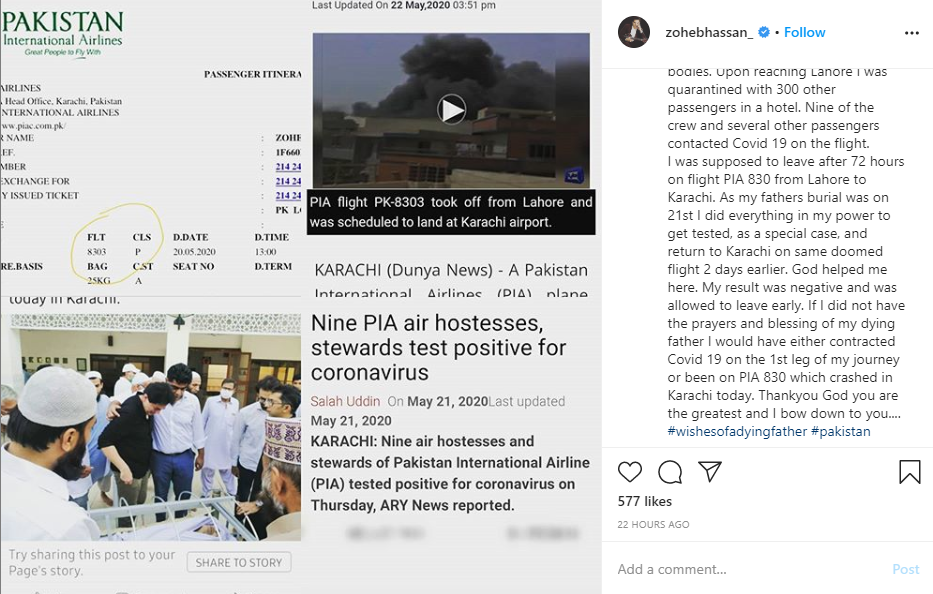 Famous Pakistani singer Zohaib Hassan’s father passed away in Karachi on May 15 this month and Zohaib Hassan left London for Pakistan immediately to attend his funeral.

According to the singer, his father was to be buried in Karachi on May 21 and he had reached Lahore from London and wanted to reach Karachi as soon as possible.

According to Zohaib Hassan, if it were not for his father’s prayers, he too would have been on the ill-fated Pakistan Airlines (PIA) flight from Lahore to Karachi. In this regard, the singer also released a long post on his Instagram account.

MY INCREDIBLE JOURNEY TO FULFILL THE WISHES OF MY DYING FATHER IN THE HOLY MONTH OF RAMADAN. (PLEASE READ THIS) My dear father who passed away last Friday promised me to take care of my ailing mother if he dies. He died a few hours later. The only flight available was 300 miles from London in Manchester. With great difficulty I managed to get on to a ‘repatriation’ flight which was mainly carrying coronavirus affectees and dead bodies. Upon reaching Lahore I was quarantined with 300 other passengers in a hotel. Nine of the crew and several other passengers contacted Covid 19 on the flight. I was supposed to leave after 72 hours on flight PIA 830 from Lahore to Karachi. As my fathers burial was on 21st I did everything in my power to get tested, as a special case, and return to Karachi on same doomed flight 2 days earlier. God helped me here. My result was negative and was allowed to leave early. If I did not have the prayers and blessing of my dying father I would have either contracted Covid 19 on the 1st leg of my journey or been on PIA 830 which crashed in Karachi today. Thankyou God you are the greatest and I bow down to you…. #wishesofadyingfather #pakistan #india #pakistan #fortheloveofgod #godisthegreatest #ramadan #incrediblejourney #zohebhassan #naziahassan #father

“My father, who passed away last Friday, promised me that if anything happened to him, I would take care of my sick mother. The only flight available at that time was 300 miles from London,” wrote Zohaib Hassan. Departing from Manchester, I traveled with great difficulty on this flight which contained mostly Corona victims and corpses. Upon arrival in Lahore, I was quarantined in a hotel with 300 people, a few passengers including the flight crew were affected by corona on the same flight.

“I was supposed to reach Karachi on PIA Flight 830 after 72 hours, but my father’s funeral was on May 21, so I tried my best to get my test done quickly and let me take the same ill-fated plane,” he added. The day before I reached Karachi, God helped me here, my Corona test came negative and I was allowed to leave early.

According to Zohaib Hassan, “If the prayers of my dying father had not been with me, I would have either fallen victim to Corona or been on the PIA 830 plane that crashed in Karachi.”