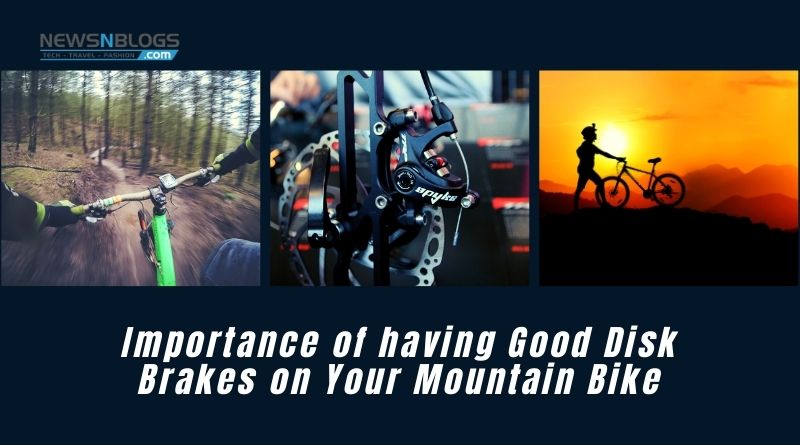 If you are looking for improving confidence in the trails, and you also want to have more grips on your bike, then you should probably get good disc brakes on your mountain bike and here I would be telling you why and the importance of having good disc brake matters. As you should know, disc brake automation has come a long way over the past years and on the market. The disc brakes are a powerful and radical mechanism that has a hydraulic or a cable drove caliper which allows the disc brake pads onto the rotor that helps in slowing down your bike.

You can have good control of your braking while riding a bike:

By having good disc brakes, you would be able to break easily and effectively whenever you want to which would also help you in decreasing the risk of having an accident while riding your mountain bike. You would also be able to brake with less hand effort required and most people think that disc brakes are stronger which is false and in reality, both the rim and disc brakes are efficient enough of flipping you off your bike so I would suggest getting disc brakes would be better which would allow you to have more control over your bike as you ride it.

Disc brakes won’t get damaged easily compared to other brakes which are heavily affected according to the trail. It would also have a wide range of working capability on many trails such as muddy, slippery, and wet tracks. You should have already understood that mountain bikes have been used on every terrain which is known to a person so the bike should have good brakes which are not affected by the weather as rim brakes tend to get rusted when they are exposed to wet terrain, however, disc brakes are a closed system where these kinds of problems don’t occur.

The V-brakes would also start slipping when it’s in the mud due to it being covered in stuff and when snowing, the cable could crack because it will ice up. But hydraulic disc brakes won’t be affected much as it would be nearer to the center of the wheel and would be attached to the wheel hub.

You won’t have to worry about tires overheating:

The best and most important of having good disc brakes would be that even in hot weather, the tires won’t be overheated due to the brakes because the disc is not connected to the main rim and only the disc would heat up during operating the brakes. The holes which are drilled in the rotor will help in providing a higher heat bust than a rim would. The disc will also heat up less than a V-brake would.

It has many wheels contours:

When riding mountain bikes, there are many different tracks that you would have to ride on which tires you out more quickly due to changes in the tracks so with disc brakes, you can switch your brakes according to different terrain conditions which would give you a great advantage on the terrain when riding your bike.

Conclusion – Wrapping It Up!

On the top, I have given you the importance of the disc brakes on mountain bikes which would help you resolve many obstacles that you may go through when riding your bike. I hope that this article was very informative for you and has helped you solve your problem and have given you an understanding of why it is very important to have good disc brakes on your mountain bike. If you still have any doubts in your mind related to the topic then feel free to ask us everything you need to know. We will be really delighted to provide you all the answers to your queries and give a solution to your problems in our upcoming articles.