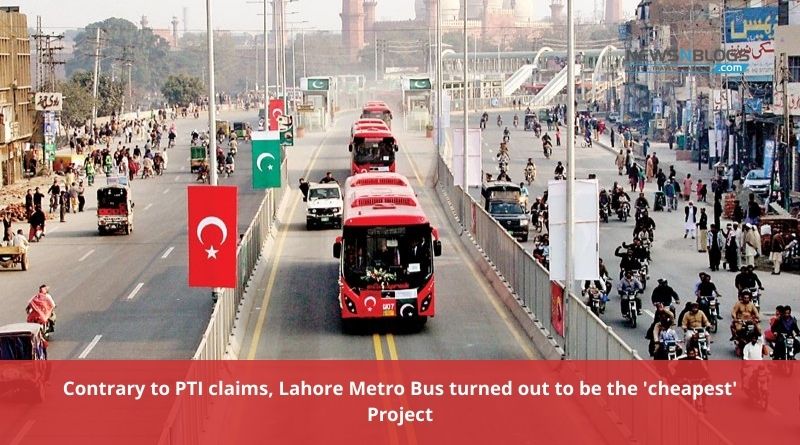 The leadership of the ruling Pakistan Tehreek-e-Insaf (PTI) has always termed Lahore Metro as the most expensive project but the report submitted by the Punjab government to the provincial assembly acknowledged that the project was not only cost-effective but also a very useful service.

The written report submitted by the Ministry of Transport also acknowledged that thousands of citizens are benefiting from this project and its fares are also low while the construction work was also standard. It has also been admitted that there is no corruption in this bus plan.

Uzair Shah says that the main reason for this was that the design was unique and before it started in 2012 the cost of equipment was also low and stations were built on both sides of the 27 km track.

“In contrast, stations have been set up along the Multan and Islamabad metro bus service routes in between, and both projects were built later when the cost of goods was high.”

According to Uzair Shah, the Multan project is 24 km long and cost Rs 28 billion, while the bridges and kits on the Islamabad Metro bus route were more so it cost Rs 44 billion.

He said: “Similarly BRT Peshawar cost Rs 90 billion while the route there is close to 27 km but its model is different. Buses are owned by the government but in Punjab, buses are rented to the company in terms of kilometers.

He said that there was political propaganda against the Lahore bus service project which cost Rs 70 billion or corruption was committed. All these costs are fixed in PC One so there is no question of corruption.

How useful is the government for Metro Bus?

According to the report, PTI chairman Imran Khan’s allegation that the Metro Bus Lahore project was expensive has been proved wrong by the PTI Punjab government.

The cost of the Metro Bus Lahore construction project and how many people are benefiting, these details were presented by the Transport Department in the Punjab Assembly, according to which the Metro Bus Service project cost Rs 29.61 billion.

The one-way fare of Lahore Metro Bus Service is Rs. 30 based on a flat rate.

After the metro bus service, when the PML-N government started the Orange Line project, the ruling party continued to criticize it. But later it had to be restored and the present government also inaugurated it.