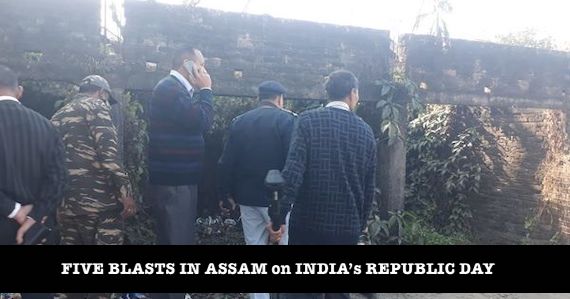 The state of Assam resonated with four successive blasts on India’s ‘Republic Day’. According to Indian media, colorful celebrations are going on throughout the country on the occasion of the Republic Day, but on the occasion of this important national day, a powerful explosion has occurred in Dibrugarh district of Assam and 3 in Chardio district.

The blasts took place in public places including Gurdwara and a bazaar, but no casualties were reported in the blasts. The Gurdwara building has been damaged and the market was empty due to a public holiday.

Police have laid the blame for the grenade blasts on the separatist militant outfit Alpha, which announced that the organization celebrates the Republic of India as Black Day and that the blasts were carried out in the context of fear. May the panic spread. It should be noted that the deprivation caused by negative policies for minorities in India has led to several separatist parties, one of which is also the United Liberation Front of Assam (ULFA), which has roots in neighboring Myanmar.